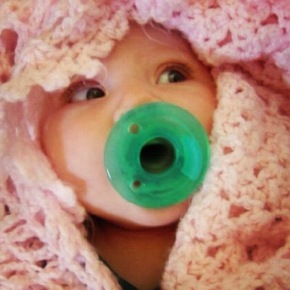 Lately I have found myself sadly focusing on the apparent inevitability of Daughter growing up, and it’s really been getting me down. Husband and I both have had some rude awakenings where she is concerned lately, and we’ve not been entirely good at handling them. From her changes in appearance and attitude to the questions she’s needed to ask as a result of some boys “teasing” her at school, we’ve had to have a very important talk with her about a year and a half earlier than we had expected. We’ve had to remove Internet privileges because of her irresponsible exploration into the unknown, and we’ve been pretty heartbroken at the mistakes we seemed to have made along the way. The most gut wrenching blow of all came on Saturday, she she sat us down and said, quite seriously, “Mom. Dad. I know you guys are Santa and the Easter Bunny.” I will admit that I cried just a little.
Because all of this is going on, Husband and I both have been thinking about all of the things we will never have again. We will never have the itty bitty socks on itty bitty feet. Gone are our days of her sleeping on her dad’s chest while he naps on the couch. She doesn’t wrap a tiny hand around our fingers for support in taking small steps and the top of her head will never smell like her baby-ness again. When I asked Husband what he will miss the most, he wistfully recalled the days of strapping her onto his front to take her on a hike or to a festival. He talked about how her hands would wrap around his fingers and he would kiss her head and feel like a “real dad.” I get that. I know when she was on my hip and I was balancing a diaper bag I felt like the image I always had of a mom on my head when I was growing up. It was in those moments that it all became real for me in the beginning.

Then as we were driving along on Sunday, something happened. We had been in the car for about an hour and Daughter’s favorite Queen song came on the radio. I told her to take off her headphones so she could hear it, and there we were, all three of us, singing along to every single word. It doesn’t sound like a big deal, but it was an awesome moment of the good stuff we have now. I realized I had to find those new amazing moments because before I know it they might be gone, too. She’s still not embarrassed of me, still willing to give me hugs and jump into my arms after school. She still laughs openly at my jokes and puns. She still wants me to read to her and to cuddle.

If I spend too long thinking about what I am missing from her infancy, I’m going to miss all the great stuff from now.

I decided that I’m going to start paying better attention to the good stuff that’s happening in each moment. I’m going to appreciate that daughter told me she LIKE likes someone before she decides it’s not cool to tell your mom. Enjoying the little treasures she’s willing to give me today is going to be what gets me through all of my tomorrows.

2 thoughts on “They grow up”